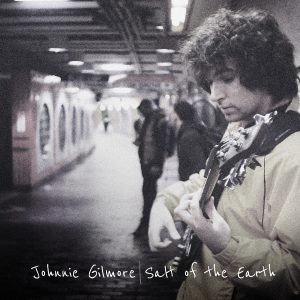 RMI Records is proud to announce the release of Salt of the Earth, the impressive debut album from virtuoso electric bassist and composer Johnnie Gilmore. This collection of solo bass performances, recorded without overdubs, breathes life into what can easily be a limiting musical context and announces Gilmore’s arrival as a compelling musical presence.

Born and raised in the Boston area, Gilmore recently graduated from Wesleyan University in Connecticut. Prior to recording this collection, he participated in multiple RMI projects, playing bass on Tobias Frohnhöfer’s album Informal while still a freshman at Wesleyan, as well as playing in the live bands of RMI Records artists Dave Kopperman and Daphne Gampel. His other musical experiences at this time ranged from straight-ahead jazz to musical directing a musical to touring Hong Kong with a rock band. All the while, though, he was continuing to develop his distinctive sound as an instrumental soloist, something he honed through hours of busking in the streets and subways of Boston.

The idea of solo bass often evokes either meandering or ultra-technical showboating, and Gilmore’s style proudly defies both of these stereotypes. While one can hear echoes of Jaco Pastorious or Victor Wooten, his playing particularly evokes solo guitar gods like Chet Atkins, Tuck Andress, Jerry Reed, and especially Gilmore’s primary influence, Tommy Emmanuel. To perhaps an even greater degree, though, he uses the bass as a tool for lyrically articulating beautiful original tunes that hint at songwriters like Stevie Wonder, Billy Joel, and Paul McCartney. One listen to his playing shows how attainable this unlikely balance is in his hands. He uses some elaborate techniques such as finger tapping, harp-like cascading harmonics, and mid-song capo adjustments, but much of his lush orchestration is owed to nothing more mysterious than musical vision and the determination to problem-solve his way to satisfying conclusions. The warmth of the sound is owed partly to the multiple microphones he used in the recording process, embracing rather than masking the sounds of his hands on the bass and even his own breathing.

Gilmore’s knack for melodic ballads is also in abundance, as on tracks like “If I Don’t See You Again,” “Thinking of You,” and the one cover song on this collection, Bob Dylan’s “To Make You Feel My Love.” There are exotic moments throughout, like the calypso-esque feel on “Swamp House,” the upbeat, Dylanesque vibe of “The Drifter,” and the East Asian flavored waltz “Half the World Away.” Meanwhile, he both invites and transcends the inevitable Flecktones comparisons with the funky title track and countrified stomps “I’ve Got To Make My Own Way” and “Petty Theft,” a reference to Chet Atkins’ playful term for young musicians emulating the old guard. These influences can be heard coming together on “The Franklin Line,” a tribute to the MBTA line he would take to get to town to busk, and the closing track, “The Ballad of Egbert, Kegbert, and Joey the Cormorant,” a touching tribute to his grandfather’s knack for colorful storytelling.

Noah Baerman, Resonant Motion’s Artistic Director and label head of RMI Records, was one of Gilmore’s teachers in college, and says “I have really enjoyed watching Johnnie mature. It was clear from the get-go that he was an exceptionally serious young musician, and his music embodies the best balance possible, where the potency of his technical skill doesn’t lead to gratuitous displays of chops, but rather allows him to give himself over fully to lyricism, expressiveness, and remarkable presence in the moment.”