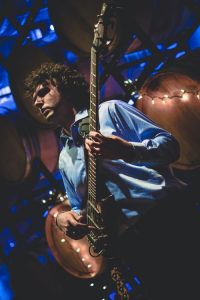 When he first picked up the electric bass, a few months shy of his fifteenth birthday, Johnnie Gilmore knew he’d found his calling. After a few years of gigging as a traditional sideman, Johnnie began to find his voice as a solo player and songwriter — think Paul McCartney’s melodicism, Stevie Wonder’s hard-edged harmony, and Victor Wooten’s technical showmanship thrown in a blender — and honed his repertoire and stagecraft as a street performer and local fixture in his hometown of Boston.

After earning his B.A. in music from Wesleyan University in 2018, where he won the Gwen Livingston Pekora prize for excellence in music composition, Johnnie moved to Los Angeles, releasing a solo album, Salt of the Earth, and an EP, When You Come Home, on Resonant Motion Records. As a solo artist, he has toured across the U.S. and opened for living legends Stu Hamm and Fareed Haque; his music has been shared on social media by rapper Trey Songz and celebrity chef Roy Choi. He also continues to work as a sideman, including as direct support for Fantastic Negrito at the 2019 Topanga Days Festival and The Wailers on their 2020 winter tour.