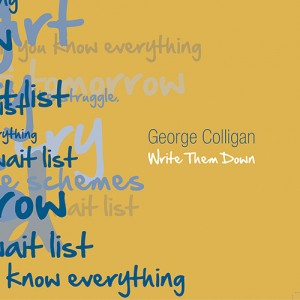 RMI Records is proud to announce its partnership with the multi-talented George Colligan and the October 20, 2015 release of Write Them Down, his first album for the label. This strikingly eclectic collection is Colligan’s first album as a singer-songwriter and his first as a “one man band,” playing and singing all of the parts on each track. While there are plenty of moments that showcase his signature keyboard work, his multi-instrumental virtuosity, evoking artists ranging from Stevie Wonder and Prince to Todd Rundgren and Paul McCartney, is not here for show, instead serving the emotional weight of these nine heartfelt, memorable songs.

2015 winner of the Downbeat poll for Rising Star – Keyboard and a veteran of over 100 recording sessions, including 27 as a leader, Colligan has enjoyed stints in the bands of jazz luminaries including Vanessa Rubin, Buster Williams, Gary Bartz and Lonnie Plaxico as well as an ongoing membership in Jack DeJohnette’s group. Though he is understandably best known for the jazz piano skills that have made him one of the most in-demand players on the scene over the last twenty years, there have been hints at the diversity of his talents. His albums Unresolved, Desire and Runaway and Ask Me Tomorrow all contain tracks featuring his stellar work on trumpet, his primary instrument when he began serious musical studies. He plays authoritative, DeJohnette-inspired drums on three albums by his wife, the brilliant pianist/composer Kerry Politzer, as well as on the debut album by his own piano-less ensemble Theoretical Planets. His popular blog JazzTruth, meanwhile, shows his affinity for expressing his depth of insight about both music and the world beyond it in words as well as sounds.

Nonetheless, nothing in his past dossier will entirely prepare listeners for this sweeping album, which adds upright and electric bass, baritone horn to the trumpet, keyboards and drums. Perhaps the biggest addition is Colligan’s voice, which at various points evokes a wide range of other piano-playing singers, including Randy Newman, Ben Folds, Mose Allison and Dave Frishberg. Not coincidentally, each of those singers is known also as songwriters with incisive wit, and Colligan’s lyrics on Write Them Down are revelatory for an artist most known for his instrumental and compositional prowess. His poetic style addresses topics of both personal and global import with a disarming honesty and directness.

While Colligan’s primary point of reference remains the world of instrumental jazz, his formative years exposed him to a range of music that included Stevie Wonder, Carole King, the musical Jesus Christ Superstar and the osmosis of Top 40 radio that was inevitable for any child of the 1970s or 80s. Galvanized by recent jazz artist-cum-songwriter projects by Nicholas Payton and Brian Blade and by his work as an accompanist with other singers, Colligan decided to take the leap into pursuing his own songwriting endeavors. As he explains, “Once I got the nerve to put words down, the floodgates opened. My artistic intention, as in my instrumental jazz compositions, is honesty. If I was going to do this, it had to be meaningful to me and hopefully others. I wanted to write about things that 30 and 40 somethings care about.” So began a prolific burst of writing, followed by a lengthy process of overdubbing all the parts, whether in his office at Portland State University (where Colligan serves as a faculty member), his bedroom or his garage. 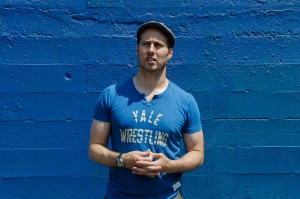 The album succeeds mightily in displaying both Colligan’s musical breadth and his worldview. “I Don’t Have the Time” evokes the sounds of the Police as it addresses the ways in which well-intentioned people, especially political leaders, descend into greed and clutching for power. The ominous music of “The Beginning Of The End,” meanwhile, provides the landscape for Colligan’s reflections on the overwhelm and apathy that can result from the modern-day glut of access to information about worldwide tragedies. “Write Them Down” fuses the musical DNA of Earth Wind and Fire with the rhythms of Brazil. The protagonist of the song, Colligan says, evokes “not quite ‘Death Of A Salesman,’ but more like ‘Salesman Trying To Hang In There Against The Odds.’ His hopes exist only as scribbles he makes in his journal every night, weary from the challenges of making ends meet in the modern world.” The music of “Get in Line” has a Joe Jackson flavor with a hint of Donny Hathaway but with a swinging rhythmic pulse. The lyrics, written half-awake at 4:30 a.m. in a Newark Airport hotel, serve as a reality check for ambitious but naïve aspiring artists. Like much of the album, both of these songs feature substantial keyboard solos by Colligan.

While much of the material revolves around social issues or advice for people experiencing modern-day struggles, there are also songs about relationships. “The Ice World,” perhaps the most overtly jazz-based song on the album, finds the musical sweet spot between McCoy Tyner and Bruce Hornsby. The lyrics are also the most allegorical here, as a sudden breakdown in communication in a relationship is illustrated through the image of a deep freeze in the environment. “Never Let Go” and “Magic Laughter” are more lighthearted relationship songs. “Never Let Go” is a love song to Colligan’s wife that prominently features his soulful melodica. “Magic Laughter” is an upbeat rock-tinged song that evokes the lyrics of Fats Waller’s “Until the Real Thing Comes Along” in using hyperbole to express devotion.

In keeping with the mature worldview represented here, though, one cannot have relationships without loss, and the emotional centerpieces of the album are two songs that address this reality with great tenderness. The soulful pop ballad “Paradise” serves as a letter of comfort and solidarity to a family dealing with the loss of a child. The album concludes with “Nothing Without You,” written by Colligan after the sudden death of his mother and performed at her funeral. Over an R&B-tinged musical backdrop akin to Luther Vandross or Anita Baker, Colligan sings a eulogy that simultaneously warms and breaks the listener’s heart.

This material is a perfect fit for RMI Records, the label associated with Resonant Motion, a non-profit primarily concerned with the intersection of music and positive change. “We are so grateful to be able to share this material with the world,” says Noah Baerman, label President and Resonant Motion’s Artistic Director. “I have been a longtime admirer of George’s instrumental work and have known for years that he had it in him to make this kind of direct statement. We are delighted to have him in our stable and hope that listeners hear the continuity between this music and his previous work.” Indeed, rather than a departure, Write Them Down is a natural extension of George Colligan’s body of work, while representing a whole world of new possibilities both for him and for any open-minded music fans.