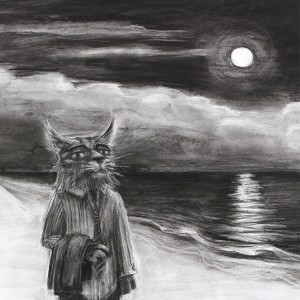 RMI Records is proud to announce the August 15 release of Island Off the Coast of America, the debut solo LP by Dave Kopperman. This vinyl-plus-digital release shines due to Kopperman’s prodigious talents as a performer and songwriter and positions him for greater recognition. His eclectic music at once evokes the folksy harmonies of the Byrds, the mature songwriting of Paul McCartney, the lush wordscapes of Paul Simon, the ambient, progressive textures of Pink Floyd and the no-nonsense rocking of the Talking Heads. Even as the songs cover wide ground, his distinctive musical voice cuts through, as do the compassion and incisiveness of his tales of human struggle.

A RISD-educated visual artist, Dave Kopperman has had a successful and varied career in that realm, ranging from comics to canvas to graphic design. The love of and mastery over language so evident in his lyric style has also led to his being a decorated essayist and playwright. Through it all, though, music has always been an integral part of his life’s work. He led the bands Analogue and Copper Man, releasing an album with each group that showcased his songwriting and singing, as well as co-leading the songwriting collective The Tappan Sea, whose unreleased debut album is slated for issue in 2016. He played guitar, bass, drums and keyboards in a number of other bands, including a stint touring with Lizard Music alongside musicians who went on to play with Cat Power, Wilco and Denny Laine. Until now, though, he never found himself directly in the spotlight.

“This album is long overdue,” says RMI Records label head Noah Baerman. “Years ago I first heard Dave Kopperman’s self-produced tracks made on his Tascam Porta-One cassette recorder. I was won over immediately by his songwriting, and the organic feeling of his overdubbed one-man-band performances to me put him right in the same wheelhouse as Todd Rundgren, Paul McCartney, John Fogerty, Stevie Wonder and other masters of that realm. When I formed RMI Records, a top priority for me was having a platform to put Dave’s music out to the wider audience he so richly deserves.”

This DIY approach still informs Kopperman’s process, handling most of the recording process himself with his mobile studio. The majority of the recordings began with him playing either Rhodes electric piano or rhythm guitar in jam sessions with his longtime collaborator, drummer Edz O’Leary. The next steps involved his own layering of additional parts, including his signature supple, melodic bass lines. His vocals, meanwhile, showcase his evolution into a powerful, nuanced singer. From the relaxed delivery of the Gene Clark inspired “7 x 7” to the Buddy Holly meets David Byrne yelp of the new wave rocker “Analogy Song,” every track on Island Off the Coast of America commands attention. After laying down those basic tracks with O’Leary, it was time for Dave to take his show on the road and add the talents of some of his colleagues to the mix.

Former Johnny Bravo frontman Ansley Lancourt, a childhood friend of Dave’s, plays the crunching lead guitar that is his calling card on several tracks, including “Spent,” a wistful ode to creative and economic bankruptcy that rocks with the relaxed authority of Uncle Tupelo and late-period Byrds. He also adds tasty solos on “Analogy Song” and on the title track, a tribute to Spalding Gray that hints at the world music experiments of the Talking Heads. Jazz guitarist Keith Gibson’s tasteful, blues-inflected lead lines add a melodic edge to the achingly poignant “Rain on the Hills,” which uses a slow groove and harmonies evocative of Fleet Foxes to vividly illustrate civilian terror in a war zone. Noted Broadway director Johanna McKeon adds haunting background vocals to “Baby Jane,” an acoustic, McCartney-esque tale of sexual obsession. That song features rich-toned cello by Melanie Hsu, who also contributes layers of cello and her haunting vocals to the anthemic “Blown In,” a song propelled by Kopperman’s 12-string guitar and Moog synthesizer. That track and the lead single, “Don Henley,” feature the drumming of Sean Scorsone, another longtime associate of Dave’s. Some guests contributed to a number of tracks, including vocalist Garth Taylor of the Rooks and trumpeter Kate Ten Eyck, a longtime friend and collaborator who also drew the evocative cover art and collaborated with Kopperman to draw and animate the video for “Don Henley.” Baerman himself steps out of the label office to contribute Hammond organ throughout, as well as a Moog solo on the title track and a climactic piano rave-up on “Americana.” 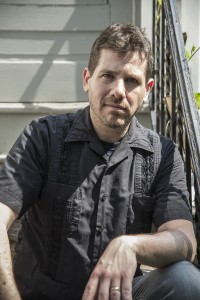 While on paper this may sound like a revolving door of guest artists, there is never any question that Kopperman is the focal point, between his songs, his vocals, his command of the majority of the instruments heard on the record and the cohesive production that makes the record flow from beginning to end. Not only does Island Off the Coast of America have a timeless sound in terms of material and texture, but the LP format was central to the album’s construction. With enough material for a double-CD, the decision was made to create a pithy narrative instead. A distinctive A-side and B-side plus a gloriously nuanced cover ultimately result in a comprehensively rich experience for the listener.

Dave counts Steely Dan among his influences from both musical and engineering standpoints, though the focus here is on raw emotion as much as pristine studio craft. The deliberately no-frills recording process of “Don Henley,” for example, gives the tale of romantic alienation a wry snarl. His vision as engineer and arranger also allowed him to pursue the stylistic hybrids that provide some of the album’s most distinctive moments. “Gold” is another emotionally affecting tale of financial hardship, over a musical landscape that seamlessly melds the folksy intimacy of Tim Buckley with the Krautrock soundscapes of Neu! and Can. The album wraps up dramatically with “Americana,” a modern classic amidst this album of uniformly top-notch material. The song shows influences ranging from Television to Paul Simon, buoyed by a drum groove, evocative of Headhunters-era Herbie Hancock, that drives the song so authoritatively that Dave insisted on giving O’Leary a co-writing credit.

It is that song that in many ways also sums up Kopperman’s outlook, through a tale of a complicated relationship with our nation, especially during the Bush era. The song references the same cross of gold that is central to the song “Gold,” stemming from a noteworthy speech by the 19th century populist Presidential candidate William Jennings Bryan. In this case, though, Kopperman says, the reference “isn’t about the economic aspect, but about how we use politics and prejudice to drive wedges between ourselves.” Ultimately the lyrics on this track resoundingly bring home the message of hope amidst struggle that underpins all of these inspiring songs. “I’m also talking about my hope that the dreams of America – literally, the matchless art and culture that we’ve created – will ultimately redeem us all.”

Video for the first single from Dave Kopperman’s Island off the Coast of America, “Don Henley”
Animation by Dave Kopperman and Kate Ten Eyck