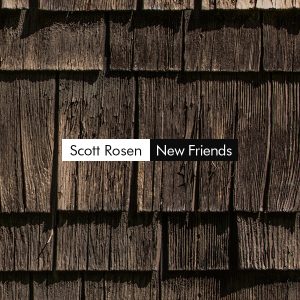 RMI Records is happy to announce the release of New Friends, the soulful debut album from jazz guitarist Scott Rosen. Rosen presents five original compositions and five jazz classics in a swinging and lyrical collection of music that showcases an impressive quartet with pianist Jen Allen, bassist Henry Lugo, and drummer Matt Wilson, and makes us all reconsider what constitutes “too late” in the life of an artist.

Scott Rosen is a Connecticut-based musician currently experiencing something of a rebirth. The tracks on New Friends embody the joy of that rebirth while displaying none of the rust one might expect from a musician not far removed from a lengthy hiatus. An accomplished professional musician in his late teens and twenties, Rosen put the guitar down for 25 years, burned out from some difficult experiences both in music and beyond. Stepping away from those dark times, he catalyzed a different life, including a family and a thriving career as an attorney. From that point of strength, and with the encouragement of his wife Nancy, he started playing again in his mid-fifties and was surprised to discover that his chops came back fairly quickly and the darkness from his youth and the light of his present-day life could come together as a satisfying musical whole.

Part of this re-boot was the warm welcome he received as he began putting himself out there within the Hartford, CT jazz scene. Sitting in on a regular basis with musicians like vocalist Atla DeChamplain (who is heard on two tracks here) and pianist Alex Nakhimovsky provided the musical stimulation and sense of community that allayed the natural sense of being an outsider and validated his unquestionable skill and expressiveness as a musician. Pianist and RMI Records label head Noah Baerman recalls that in a conversation with Rosen in 2016 over a casual lunch, “Scott expressed the dream of someday being ready to make an album. He seemed genuinely surprised when I told him he was ready for that, and his excitement over bringing that to fruition made it a no-brainer for me to offer to produce the album and to release it on our label.”

The subsequent sessions over two days in the summer of 2017 produced the music that makes up the bulk of New Friends. Crisply recorded at Firehouse 12 Studio in New Haven, these tracks display the fun and chemistry produced by Rosen and his friends, both new (pianist Allen and bassist Lugo, with whom he had played and hung out over the previous couple years) and brand new (renowned drummer Wilson, making music with Rosen for the first time at these sessions). The infectious Latin waltz of the title track most directly expresses Rosen’s gratitude for the musical and personal lift that other musicians’ support has provided him, though that buoyancy is evident throughout.

The original compositions all express his gratitude for others in diverse ways. The hard-swinging opening track “Red Horizon” features strong solo turns from Allen and Wilson in addition to Rosen himself and offers a musical portrait of the red Plymouth that Nancy drove early in their courtship. “Missing Linc,” featuring Rosen, Allen, and Lugo, is a swaggering musical tribute to Linc Chamberland, mentor to many guitarists and other musicians, Rosen among them. On this number we hear the breadth of Rosen’s vocabulary, ranging from bluesy swing in the vein of Grant Green to Eric Dolphy-esque angularity. The slyly funky “Cliff Walk” is a tribute to his friend, bassist Cliff Pia, and features a playful, interactive sound spearheaded by some vintage Wilson drumming. By contrast, “Unexpected” is a somber, free-time ballad composed to offer hope to a close friend upon learning of his cancer diagnosis.

Meanwhile, the quartet tackles three tunes from the jazz canon. One of Rosens trademarks is a compact lyricism that evokes Jim Hall, and his sensitive reading of “’Round Midnight” puts that on display. “I’ll Remember April” is given a relaxed, Latin-infused treatment.  By contrast, the modern hues that are heard throughout the album are perhaps on fullest display on Rosen’s rhythmically clever arrangement of “Juju” by Wayne Shorter, one of his primary influences. The emotional potency of the album is laid bare by two succinct duets that pair Rosen with vocalist DeChamplain. The optimism that pervades Rosen’s approach can be heard on a jaunty reading of Irving Berlin’s “Blue Skies” that harkens back to swing era giants like Basie and Ella. By contrast, the album concludes with a tender, intimate reading of “Nature Boy.”

The closing sentiment of that song, “the greatest thing you’ll ever learn is just to love and be love in return” is an appropriate ending to this collection of music and serves as something of a mission statement for the album as a whole. While creating a work of art that takes its rightful place in the realm of high quality straight-ahead jazz recordings, Rosen has also put together a project that has broader resonance for all those nourished by an affirmation that self-expression and artistic potency do not always follow a linear path.