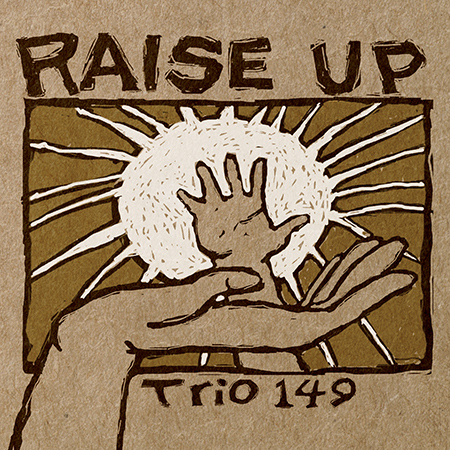 RMI Records is happy to announce the release of Raise Up, an all-instrumental yet remarkably diverse debut album from Trio 149. The group is comprised of Jen Allen on piano and electric piano, Noah Baerman on Hammond organ and synthesizer, and Johnathan Blake on drums. The unconventional instrumentation is just a means of expression, in this case an expression of the musicians’ aspirations for a better world.

Allen and Baerman first performed together in a two-keyboard group in 2014, inspired in part by piano/organ combinations ranging from classic soul and gospel to the comparatively small handful of modern jazz pairings. The genesis of the group dates back further, in a sense, in that as longtime friends and colleagues the intention to collaborate was present for years prior, with instrumentation as the only barrier against making it happen. For their maiden record date, they brought aboard Blake, one of the busiest and most respected drummers on the global jazz scene. According to Baerman, “Johnathan is a phenomenal musician and, equally important to this project, a parent with a broad sense of conscience and concern for the wellbeing of humanity. We needed a truly kind and soulful human being in the drum chair for this music.”

The album explores the idea of how people support one another across generations. Through these varied compositions, they explore this theme in contexts that range from the personal, intimate qualities of a parental relationship to the broader movement of people demanding a more just society. Sometimes this entails elders mentoring and supporting youth, while sometimes it is the vigor and idealism of youth that provides the strength for older generations. The music is infused throughout with encouragement for people of all ages to be bold in helping one another in any of these ways. Says Allen, “we wanted to create music that expresses our experiences and our desire to lift up others in their own journeys.”

Opening with a tender organ/piano prelude, the album quickly moves to the brightly swinging Mrs. D, a tribute to Allen’s mother, who passed away four months prior to the session. The piece was written years prior as a gift, and rather than functioning as a mournful eulogy, it is both the most bop-infused of the tracks and in a sense the most straightforward in expressing the joy and potency of intergenerational nurturing through the lens of the parent-child relationship. The mood then shifts to a more somber tone with a moody, Latin-tinged reading of Sting’s “Fragile.” Featuring Allen’s electric piano and a synth solo from Baerman, the song was arranged by Allen and, in her words, “matter and spirit are bound together in sorrow and we are called to support one another through all fragile moments in life.” Baerman’s epic “Second Sunrise” follows, with nine and a half minutes of high energy, shifting time signatures and harmonic palettes, and passionate solos by all three trio members. This piece, which was previously recorded in a more conventional piano trio for Baerman’s Bliss album, was composed for his oldest daughter out of admiration for the transformation he had watched her undergo. An adoptive parent of three daughters who came to his family through the foster care system as teens, Baerman felt it important to express the preconception-defying capacity for young people to recover from trauma and move forward in life, helped along by the love and support of others, and similarly felt the need for the music to represent the inspiring but circuitous nature of that process.

The funky “Where Two Have Gathered” follows, musically displaying the DNA of both Ahmad Jamal and Stevie Wonder. The piece expresses the importance of community in bringing about forward motion in society. Its genesis demonstrates this principle, with musical material from Allen being augmented by an additional melody from Baerman and a title supplied by Allen’s husband, saxophonist and composer Kris Allen. The music takes a folksier and more political turn with the trio’s rendering of the Sweet Honey in the Rock classic “Ella’s Song (We Who Believe in Freedom).” Says Baerman, “this is the most moving song I’ve ever heard about how people from different generations support one another in resisting the status quo and working for change. I have loved this song my whole adult life but this was the first musical setting in which I have felt like I could pull off performing it.”

The intensity ramps up with “A New Beginning,” a composition by Blake’s father, the violinist/composer John Blake, Jr., originally recorded by the composer on a 1988 live record. The message of hope is supported by Blake’s ferocious drumming, Allen’s potent Rhodes work, and Baerman’s buoyant synth bass lines. The album wraps up on an appropriately soulful note with the title track, co-composed by Allen and Baerman. Allen’s gorgeously lyrical piano builds up intensity before the baton is passed to Baerman for a wailing synth solo. On either end is the melody, which wraps yearning, optimism, and striving into a blues-drenched composition.

The cumulative impact of this music is one of transcendent determination. “One of the reasons I feel comfortable putting these big ideas into music,” says Baerman, “is because I have lived them and I know my bandmates have as well. We really hope the energy behind this music can provide people with some fuel to roll up their sleeves and participate in any way they can.” Allen adds “being an active part of lifting others up and being lifted up is the cycle that we hope to continue in this music. May it raise up all those who listen.”