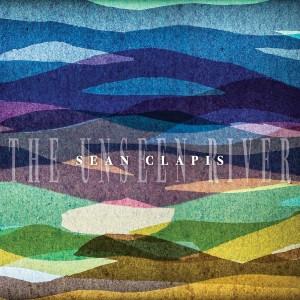 RMI Records is excited to announce the release of The Unseen River, the new album by guitarist/composer Sean Clapis and his quartet. A young, up-and-coming presence on the New York jazz scene, Clapis has one foot in the straight-ahead jazz tradition and one foot pointing forward. This is his second album as a leader and his first since moving to NY from Hartford, CT, and it shows the precocious development of his distinctive musical voice.

The guitar-and-tenor sonorities and interplay are evocative of the John Scofield Quartet with Joe Lovano and the Kurt Rosenwinkel Quartet with Mark Turner. Clapis’ command of the tradition of piano-less groups is apparent, harkening back to the work of Jim Hall in 1960s quartet recordings with Art Farmer, Sonny Rollins and Paul Desmond. His band is essential to this as well, playing in a selfless yet authoritative manner that resoundingly validates Clapis’ decision to use his working band rather than an assemblage of hired hands. Clearly they are capable of virtuosity, as evident on the up-tempo “Suleb,” a hard-swinging, modernized blues in the spirit of Branford Marsalis and Kenny Garrett. Yet they shine equally brightly navigating the gentle subtleties of “Haiti Song,” a tender, Shorter-esque waltz composed in the wake of the devastating earthquake there. Israeli saxophonist John Greenstein’s lyrical tenor blends seamlessly with the guitar on the ethereal title track, while he flexes his post-bebop muscle in the mode of Joe Henderson on “Isle of Fogo,” inspired by Clapis’ trip nearly ten years ago to teach and perform on the island of Cape Verde. That tune also features crisp, creative solo work on drums by Michigan native Jay Sawyer, whose propulsive grooves and dynamic sensitivity are vital to the sound of the album. Bassist Tim Norton, an old classmate and friend of Sean’s dating back to his days in Hartford, holds it down throughout, whether providing the woody bottom end on “Tabertune” or soloing melodically on the Hank Jones tribute “So Long Henry.”

The all-original compositions on The Unseen River showcase Clapis’ keen melodic sense in a variety of settings that in turn push the players in a variety of directions. “Analog Dog” finds the sweet spot between jazz and the music of Radiohead, while “Tabertune” (named for the talented young pianist who inspired the groove) digs deeply into the slow neo-soul pocket popularized in a jazz context by Robert Glasper and Chris “Daddy” Dave. Clapis’ wife is an accomplished concert pianist from Spain, and his affinity for various forms of Latin music can be heard interspersed throughout The Unseen River. “Two Rooms” has rhythmic elements of Spanish bolero and Brazilian choro within a jazz harmonic structure, while the album’s haunting closing number, “Respuesta” echoes the music of Djavan, with Clapis alone on guitar and offering his first recorded vocals in a haunting tenor.

Clapis himself expresses his intentions rather directly. “All too often, we commit to this idea that “serious music” is supposed to sound serious, that it is incompatible with levity, that it can’t be entertaining. The imaginary wall between the artists and the audience can suck the fun out of the music and suck the energy out of the performers. I feel it’s important to connect on a deeper level with your fellow musicians as well as the audience.” With The Unseen River, Sean Clapis takes further steps on his impressive path towards providing his audience and his fellow musicians with this spirit of direct communications, all the while maintaining rigorous standards for creating nuanced, sophisticated music.