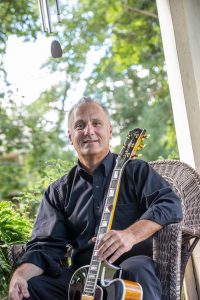 Scott started playing guitar in 1969 at age twelve and went on to study with guitar guru Linc Chamberland. He began playing professionally in 1974, jamming with jazz greats Dave Liebman, Richard Beirach and Pee Wee Ellis among others. His early career crossed many genres from rock and blues to radio jingles. At this point Scott devotes all of his musical energies to his first love, jazz. In recent years he has appeared onstage with saxophonist Greg Abate, Grammy nominated vocalist Jazzmeia Horn, bassist Avery Sharpe, and others, along with leading bands at various Hartford-area venues.  He counts as his influences guitarists Kenny Burrell, Jim Hall, Pat Martino, Wes Montgomery, and Peter Bernstein, as well as non-guitarists ranging from Kenny Barron to Wayne Shorter.

“Scott plays with a sensitivity and musicality that is rare.  His playing reflects his desire to engage the listener with the music rather than impress with his technical skill.  You’ll hear bluesy lines, interesting harmonic ideas and thoughtful lyricism free of artifice.  A treat for the discerning listener.”