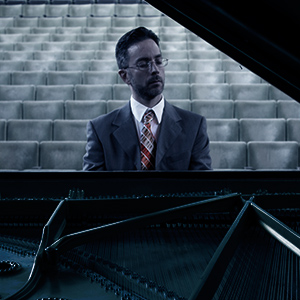 “The feelings of overcoming and transcending are palpable to me. From Muddy Waters to John Coltrane, there is ample proof that it is possible to touch those feelings through sound, and that is why I make music.” – Noah Baerman

Jazz pianist and composer Noah Baerman’s tenacity and his cutting edge yet soulful music have made him an inspiring figure to a growing legion of admirers. Ten years after nearly walking away from the piano due to his struggles with Ehlers-Danlos Syndrome (EDS), an incurable connective tissue disorder with which he was born, Noah is playing and composing with more authority than ever. These challenges and his experiences as a foster parent have deepened his already fierce commitment to “message music.”

Noah earned his B.Mus. and M.M. from Rutgers University in the 1990s under the mentorship of Kenny Barron (“Mr. Baerman is very creative and imaginative and has the technical wherewithal to bring his creative ideas to fruition.” – Kenny Barron). Since then he has participated in and composed for numerous recordings, including eight CDs as a bandleader. His 2003 release “Patch Kit” features jazz legends Ron Carter and Ben Riley and revolves around his struggles with EDS (“Much more than just a commendable exercise in education and humanitarianism, this is a wonderful and inspiring musical journey that’s a testament to the power of jazz, humor and positive energy to turn a challenging situation into one of joy and hope.” – Joel Roberts, All About Jazz – New York). Patch Kit raised awareness and funds for EDS and led to an invitation from Marian McPartland to be a guest on her long-running NPR program Piano Jazz in 2005. Two compositions premiered on that show then appeared on his album Soul Force, a tribute to the life and message of Rev. Dr. Martin Luther King, Jr. Soul Force featured Noah’s writing for large ensemble, here featuring trombonist Robin Eubanks, percussionist Warren Smith and saxophonists Steve Wilson, Jimmy Greene, Wayne Escoffery and Claire Daly. In 2008 he was awarded a “New Works” grant from Chamber Music America/Doris Duke Foundation. The resulting Know Thyself, an emotionally sweeping 65 minute suite for septet, was premiered at Wesleyan University’s Center for the Arts and at the Jazz Gallery in New York and recorded for a 2010 release.

Baerman lives in Connecticut, and has been gaining a strong reputation as an educator (“Noah Baerman understands the craft, the art and the literature of jazz. This is not token acknowledgement, but knowledge.” –Phil Schaap, Grammy-winning producer and Curator, Jazz at Lincoln Center). He teaches at several institutions including Wesleyan University, where he directs the Jazz Ensemble and teaches graduate courses in music. His teaching concepts have been codified through nine well-regarded instructional books published by the Alfred Publishing Company (“I wish these books had existed when I was first getting into jazz.” – Tom Brislin, Keyboard). His blog, NB Pontificates, covers topics ranging from frank discussions of his experiences as a survivor of disability and child sexual abuse to his popular musical Top 10 lists and his own vegetarian recipes. In 2012 he was named Artistic Director of Resonant Motion, Inc., an organization that seeks to explore and deepen connections between music and social causes, as well as forming the Jazz Samaritan Alliance, a collective of accomplished artists working to compose and perform socially conscious music. Other projects in the works include a multi-media collaboration with photographer Carla Ten Eyck depicting survivors of cancer and other life-shaking challenges, a foster care-themed set of compositions titled “There But for the Grace,” and a series of largely improvised collaborations with his wife, visual and performance artist Kate Ten Eyck.

“It is an amazing gift to have a bright future in spite of adversity. I hope to create things of sufficient beauty that I can give that gift back many times over.” – Noah Baerman