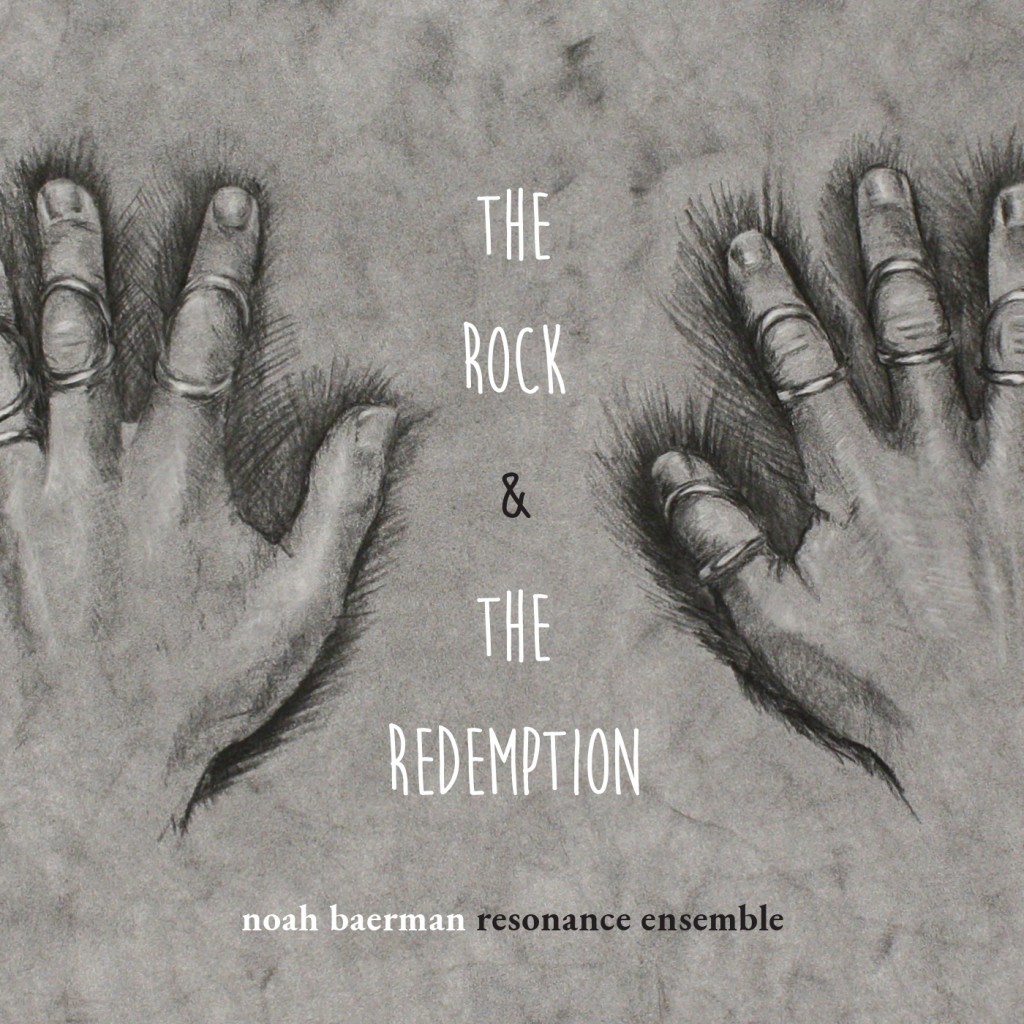 RMI Records is gratified to announce the release of The Rock and the Redemption, pianist/composer Noah Baerman’s tenth album as a leader, second on RMI Records (following 2014’s Ripples), and first to feature the Noah Baerman Resonance Ensemble. This philosophically and musically epic suite represents a significant milestone for Baerman.

Noah Baerman has had an eclectic and prolific career since completing six years of study and two degrees at Rutgers University, under the tutelage of NEA Jazz Master Kenny Barron, and moving to Connecticut twenty years ago. In addition to his work as a performing and recording artist, he has taught in varied contexts, penned ten well-regarded instructional books, founded the non-profit Resonant Motion, which addresses the intersection between music and positive change, and worked to bring attention and understanding to the disabled and of youth in foster care. All of this has taken place while stubbornly persisting through and navigating the effects of Ehlers-Danlos Syndrome, a connective tissue disorder with which he was born and which has required regular adaptation and has shaped and colored his performance career.

Baerman assembled the nine-piece Resonance Ensemble in 2015 when given the opportunity to present a concert-length work for the annual Jazz Weekend at Wesleyan University, where he directs the Jazz Ensemble. Some of the band members Baerman recruited were longtime collaborators. Alto saxophonist (doubling here on flute) Kris Allen and vibraphonist Chris Dingman both went back more than a decade with Baerman, and in 2012 the three co-founded a socially conscious composers’ collective called the Jazz Samaritan Alliance. Bassist Henry Lugo joined Baerman’s trio in 2002 and had already appeared on six of his prior releases. Two of the members, drummer Bill Carbone and vocalist Latanya Farrell, were more recent colleagues. On the other end of the spectrum were younger musicians, some of them former students. Cellist/vocalist Mel Hsu and vocalists Garth Taylor and Claire Randall were all recent graduates of Wesleyan in the early stages of their professional careers as performers. Baerman himself further increased the textural variety, branching out from the piano work for which he is best known to incorporate Rhodes electric piano, organ, synthesizer, and electric and acoustic slide guitars.

Equipped with this spirited and diverse crew and sound, Baerman went out on a limb in creating “The Rock and the Redemption,” a sweeping, eclectic, and emotionally moving concert-length work depicting Baerman’s reinterpretation of the myth of Sisyphus. By this perspective, Sisyphus’ eternal plight of pushing a rock up a mountain only to see it fall back down no longer makes him the symbol of endless, futile drudgery. Instead, his tireless pursuit of something that is objectively unattainable makes him physically or spiritually strong and leads to bigger and better outcomes, even if those outcomes are not technically “successful” ones by the rigid measure of what constitutes success. As a foster/adoptive parent, activist, and a musician enduring a physical disability that was likely to end his performing career years ago, Baerman’s own life mirrors this perspective and bolstered his determination to articulate it with this music, depicting Sisyphus’ journey from boldness to penance to enlightenment.

The texturally varied suite alternates between instrumental pieces and vocal pieces, mostly arrangements of traditional folk songs and spirituals. Each vocal number is accompanied by a single instrument, providing different types of intimacy and intensity. Dingman’s lush vibraphone accompanies the group vocal opener “Keep On,” the musical theme that underpins the suite. After the hard-swinging, Art Blakey-esque “Hubris (Sisyphus’ Swagger),” Randall fronts the singers with a sassy reading of “Run On,” accompanied only by Carbone’s tambourine. The ferocious fusion-cum-samba “Wrath” follows, leading into “Another Man Done Gone,” with Hsu putting down the cello and delivering a haunting vocal in a duet with Lugo’s acoustic bass. “Boulder” is a slow-burning instrumental featuring an intense solo by Dingman amidst a warm, mysterious texture of flute, cello, and slide guitar. Taylor testifies on “I’m On My Way” with the rest of the singers responding to his call, accompanied by Allen’s bluesy and rhythmically slinky alto saxophone. The saxophone also features prominently in “Transformation,” an instrumental that rehashes the opening musical themes in a setting that evolves from acoustic folk blues to a rhythmically elastic, raucous yet soulful sound evocative of late-period Coltrane. Hsu’s pizzicato cello introduces and accompanies “Glory Glory, Hallelujah,” featuring rich harmonies underneath Farrell’s transcendent vocals. The suite culminates with “Redemption,” a driving modern jazz instrumental with Baerman’s synthesizer figuring prominently. From there a soul-gospel electric piano interlude brings in the reprise of “Keep On,” featuring Randall again and culminating in the singers and instrumentalists coming together for a joyous, funky romp as the suite draws to a close several minutes past the one hour mark.

After the triumphant performance at Wesleyan, Baerman and the Resonance Ensemble performed the piece the following day up the road at the now-defunct Green Street Teaching and Learning Center, capturing it for posterity with a multi-camera video shoot. This decision became all the more consequential and poignant when vocalist Randall was murdered in December of 2016 at the age of 26. What was intended as a video document of a newly formed project became this CD (with the full-length performance video available to those who buy the album). Dedicated to Randall, the album’s proceeds will go to Claire’s Continuum, a new initiative through Resonant Motion to commission socially conscious musical and interdisciplinary work by first-time collaborators, honoring her social conscience, energy, and collaborative spirit, all catalytic in the development of the Rock and the Redemption.

Of the project, Baerman says “I am so grateful to have had these great musicians and humans to call upon. I know that I composed this, but really it feels more like I just curated the right talent and let them shine.” The potency in the music and its message relates to many types of adversity, including that which ultimately befell this group. “Learning to cope with the loss of Claire is a struggle,” says Baerman, “and there’s a certain irony to how relevant the philosophy behind this music is in laying out the path for taking on that struggle. Mostly I’m just touched to have this document of Claire’s gifts and to have the opportunity to share it.”