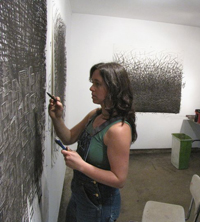 Visual artist Kate Ten Eyck creates work inspired by the visceral relationship of the body to the world around it. This fascination generates projects in different forms. Some examples include sculptures designed to strap to the body transforming human movement to animal, prints about the relationship between the human body and parasites that might feed upon it, drawings based on the gestural movement of charcoal over large sheets of paper and, most recently, stop motion animation.

Upon graduating from RISD in 1996, Kate went to work for Oddfellows Playhouse, a Middletown, CT youth theater program which promotes self-esteem through the performing arts. At Oddfellows, Kate’s responsibilities ranged from working with at-risk youth to designing and building sets for ambitious productions. Drawn to Oddfellows because of their dual social and artistic mission, her experiences there sparked her desire to become a foster and adoptive parent, which she did in the ensuing years. In the Fall of 2000, Kate began her current position, working for Wesleyan University as Art Studio Technician and as a Visiting Professor of Art, teaching drawing and printmaking. While working at Wesleyan, she completed her MFA in printmaking at the Hartford Art School.

Although her career is based in the visual arts, Kate has taken frequent detours into the performing arts. In particular trumpet in the Brown University jazz band, and participated in experimental theater projects. Over time, she has continued to perform in theatrical and musical performances, and has found these activities to be a direct path to explore her interest in the visceral relationship of the body to the world around it. From 2005 to 2007 she contributed music and moving sculpture as a member of the Lower Lights Collective, a New York-based performance art troupe that performed at several New York venues, including the Chocolate Factory, the BRIC Studio, and Galapagos. In the summer of 2007 she interned with Bread and Puppet Theater in Glover Vermont. She has also performed and recorded as a trumpet player since the 1990s, as well as contributing several original compositions to other recording projects.

Embracing elements of multiple art forms and the enrichment of teaching and parenting, her work continues to grow and evolve.